The birth place of many systems

Part of our heritage goes back to James Mitose and the art of Kenpo. Let’s explore this arts history and where it came from.

At its essence, Kenpo is a mixture of five cultures: first and most important, Chinese; second Japanese; followed by Okinawan, Hawaiian (before Hawaii became a state) and American.

Originally Kenpo was an unarmed fighting system brought from China to Japan around 700 years ago. The word “Kenpo” is pronounced “Kempo” which has led to its misspelling in many English schools over the years. Kenpo literally means “Fist law”. The Japanese adapted this Chinese style to overcome karate based systems, however, no single system in China these days represents kenpo. Instead many of its patterns can be seen scattered throughout other Chinese and Japanese systems. It is a true mixed martial art.

In fact, the term “Chinese Kenpo” was created by Ed Parker in 1960 when he found no kung-fu style that resembled Kenpo.

James Mitose is the man credited as bringing Kenpo to the west. Originally born Masayoshi Mitose on 30 December 1916 in the rural north Kona district of Hawaii. The art we call “KENPO” was passed down through the Mitose family, who studied the original art in China in the 1600’s and brought it back to Japan. Since the Mitose family was Japanese, they naturally used the Japanese language rather than the Chinese to describe their family system, which they later named “Kosho-ryu” (Old Pine Tree Style): “Ko” (old) “Sho” (pine tree) “Ryu (school/style).

James went on to study the art of Kenpo in Japan and bring this back to Hawaii where he instructed and taught the lessons of self-defence and peace to his many students which included the famous William K.S. Chow. Other students such as Ed Parker, Gordon Doversola also went on to develop their own versions of the systems called American Kenpo and Okinawa te Karate.

Originally the martial arts in China were referred to as “Ch’uan-fa” meaning “fist law.” The Japanese pronounce these same written characters “KENPO”—or “KEMPO.” In modern usage, “KENPO” spelled with an “N” indicates the original Chinese origin; when spelled with an “M” it indicates its incorporation into the Japanese culture.

As James Mitose began teaching Kosho-ryu Kenpo he adopted the gi and belt system he saw in other schools around Hawaii. Kenpo Jiu Jutsu was the original art taught by Mitose and the one referred to in his famous book “What is Self defence (Kenpo Jiu Jitsu)”.

The kind of Kenpo practiced by Mitose and the like was more of a linear style. However, an ambitious student, Ed Parker, a judo shodan, introduced to Kenpo by Frank Chow and trained under William Kwai Sun Chow, went on to develop a system of his own that eventually became known as American Kenpo. Parker changed Kenpo’s form to make it a more street-wise style.

Later, Parker began to stress more circular, Chinese movements in his teachings. And since he never named a successor to his style, there are several offshoots of his (and Mitose’s) Kenpo teachings today. Kenpo is a style that emphasizes punches, kicks and throws/standing locks. The original Kenpo that came to the United States from Mitose and Chow emphasized more linear or hard-line movements, whereas Parker’s later derivation, usually termed American Kenpo, emphasized more Chinese circular movements.

There are two styles of Kenpo, even though there are several offshoots like Kajukenbo or Kenpo Jiu-Jitsu (what Mitose ended up personally calling his art). These distinct styles are:

Through all the same notions are predominant. If you only learn one kind of defense against an attack, you’re setting yourself up for failure. After all, you never know if the particular attack that you trained for will be the exact one that comes at you.

Kenpo, both teachings from Ed Parker and James Mitose form part of our lineage and concepts within our system. 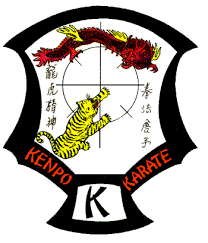